The North Carolina Senate on Thursday gave initial approval to a bill to legalize medical marijuana.

Just one day after clearing a key Senate committee that is chaired by the bill’s sponsor, Sen. Bill Rabon (R), the legislation passed the full chamber on second reading in a 35-10 vote. The NC Compassionate Care Act previously advanced through three separate panels last year.

“This bill is going to, in my opinion, help a lot of people at the end of their life at a time that they need some compassion,” Rabon said on the floor ahead of the vote.

Medical cannabis can help people “at a time that what few days, or what little time they have left, should be as comfortable and as easy as they can be,” the senator, who is a cancer survivor, said. “I think it is our duty as lawmakers to pass legislation that helps people who need our help.”

One more vote on third reading, expected next week, will be required to formally send the measure to the House of Representatives for consideration.

Here’s what the NC Compassionate Care Act as amended would accomplish:

Prior to voting on the bill itself on Thursday, the Senate adopted an amendment from Rabon. Among other changes, it makes it so the 10 licensed medical marijuana suppliers that would be permitted could each operate up to eight dispensaries, rather than four as would be the case under earlier versions of the bill. It also clarifies conflict of interest rules for physicians and testing laboratories, revises fees and reporting requirements for medical cannabis businesses and makes technical corrections to the measure.

“The licensing structure in this bill invites only very large multi-state corporations in to be eligible to participate in this new market,” she said, noting the bill’s vertical integration requirements for the industry. “Indeed, no North Carolina company can get one of the licenses that is created in this bill.”

Mayfield’s amendment was tabled, however.

Meanwhile, new poll from the Carolina Partnership for Reform found that 82 percent of North Carolina voters are in favor of legalizing medical cannabis—including 75 percent of Republicans, 87 percent of unaffiliated voters and 86 percent of Democrats.

While advocates have their doubts about broad reform being enacted in North Carolina this session, the Senate leader, Berger, has acknowledged that opinions are shifting when it comes to marijuana in the state, and he said that Rabon specifically “for a long time has looked at the issue.” 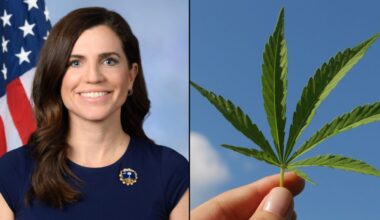