House Appropriations Committee leadership has taken a special interest in psychedelics research this year as they’ve crafted spending bills and reports to fund various federal agencies. And one of the latest examples of that interest comes from a manager’s amendment to legislation covering the Department of Health and Human Services.

The newly added report language contains two sections addressing the therapeutic potential of psychedelics. One broadly encourages research into the substances as potential treatment options for post-traumatic stress disorder and severe depression, while the other talks about psychedelics as a possible tool to combat conditions that commonly afflict military veterans.

The measures, adopted by the committee on Thursday, build on other existing drug policy reform provisions of the appropriations bill and report. However, there’s also a new bill section that advocates take issue with to prohibit the use of federal funds to procure or distribute “pipes or similar cylindrical objects” used to consume Schedule I drugs. It’s viewed a discriminatory iteration of drug war politics that reared its head earlier this year over the issue of funding the inclusion of so-called crack pipes in harm reduction kits.

But the psychedelics language is a positive signal from the committee as far as reform advocates are concerned. The first provision calls on the National Institutes of Health (NIH) to explore public-private partnerships in studies on the substances for mental health treatment and submit a report with findings within six months of enactment.

“Psychedelic Research.—The Committee encourages NIH to assess opportunities for further private-public partnerships on researching the use of psychedelic drugs to treat post-traumatic stress disorder and major depressive disorders and provide a report within six months of enactment of this Act on the feasibility of providing potential dedicated researching funding for such partnerships.”

That section is followed by additional language addressing the ongoing crisis of veteran suicides and emerging research indicating that psychedelics may serve as a valuable therapeutic option in treating conditions that have contributed to the suicides. Again, there’s a call for NIH and other federal agencies to conduct research into the drugs.

“Psychedelic Treatments.—Despite the recent Department of Veterans Affairs’ 2020 National Veteran Suicide Prevention Annual Report that showed there were no significant increases in the veteran suicide rate from 2017 and 2018, the Committee is concerned that over 17 veterans on average continue to commit suicide each day, which is a number that has remained persistent over the past decade. House Committee Leaders Urge Psychedelics Research For PTSD And Depression In Updated Spending Measures, for treatment-resistant PTSD and major depressive disorder, particularly for veteran participants. Further, U.S. academic research institutions are involved in investigating psychedelic treatments, including Johns Hopkins University, Harvard University, Yale University, New York University and Baylor University. In light of growing interest in this area, the Committee encourages NIH and other relevant Federal agencies to undertake, and where appropriate expand, research to evaluate the effectiveness of psychedelic therapies in treating PTSD, major depressive disorder, and other serious mental health conditions.”

The bill section on drug paraphernalia, meanwhile, reads as follows:

“Sec.__. None of the funds made available by this Act may be used to purchase, procure, or distribute pipes or similar cylindrical objects for use in smoking or inhaling any controlled substance in schedule I of the Controlled Substances Act (21 U.S.C. 801 et seq.).”

With respect to psychedelics, the updated report isn’t the only piece of appropriations legislation that tackles the issue.

The report for the Commerce, Justice, Science, and Related Agencies (CSJ) that was released last month also contains a novel section that specifically concerns psilocybin, calling for a Government Accountability Office (GAO) analysis on barriers to state, local and tribal programs for the psychedelic.

The GAO report, the committee says, should look at the impact of the federal Controlled Substances Act (CSA) enforcement in jurisdictions allowing for psilocybin, barriers to accessing the psychedelic for medical use, recommendations on how to remove research blockades and more.

Reps. Earl Blumenauer (D-OR), Barbara Lee (D-CA), Alexandria Ocasio-Cortez (D-NY) and Lou Correa (D-CA) had requested that section in a letter to subcommittee leadership in April, noting that states and localities across the U.S. have started to “relax their prohibitions against the use of psilocybin and other psychedelic substances.”

The letter, which was shared with Marijuana Moment, says that despite these reforms, “there are significant gaps in the research available on access to state-, local-, and tribal-legal use of psilocybin, including therapeutic programs and religious, Indigenous, or spiritual practices.” So they requested the following language, which was attached to the base CJS report:

“Psilocybin Report.—The Committee directs GAO to report to Congress within one year of the date of enactment of this Act on the barriers to State, local, and Tribal programs that incorporate psilocybin products, including for therapeutic use and religious, Indigenous, or spiritual practices. The report shall: (1) review the impact of Controlled Substances Act enforcement on psilocybin use legally sanctioned by States, local governments, and Tribes; (2) identify barriers to accessing therapeutic use of psilocybin in States that have made such use legal under State law; (3) recommend ways to improve the processes used to obtain Federal authorization to conduct research with psilocybin-related substances; and (4) identify barriers to legal access to and use of psilocybin for religious, Indigenous, or spiritual practices under the Religious Freedom Restoration Act.”

(Find the letter requesting the psilocybin section at the bottom of this article.)

Meanwhile, Rep. Matt Gaetz (R-FL) filed an amendment to a large-scale defense bill on Thursday that encourages research into the therapeutic potential of psilocybin mushrooms and MDMA as alternatives to opioids for military service members.

The congressman is seeking to attach the amendment to the National Defense Authorization Act (NDAA). It would build upon another cannabis-focused amendment that was already approved by the House Armed Services Committee last week.

The existing provision from Rep. Seth Moulton (D-MA) calls for a Department of Defense (DOD)-led study into the efficacy of cannabis as an opioid alternative. Gaetz is requesting to broaden that language to also cover psilocybin and MDMA.

The amendment would expand the study “by including MDMA (3-4 methylenedioxymethamphetamine) and psilocybin mushrooms in the study on alternatives to prescription opioids in the treatment of members of the Armed Forces on terminal leave preceding separation, retirement, or release from active duty,” according to a summary posted by the House Rules Committee.

Officials at two agencies within the National Institutes of Health (NIH) recently acknowledged in a letter to two U.S. senators that federal prohibition makes it harder to study the benefits of psychedelics, requiring researchers to jump through additional regulatory hoops.

Outside of the psychedelics space, there’s are numerous drug policy sections that have been included in appropriations bills and reports for the 2023 Fiscal Year.

Over the past couple weeks, the committee has filed legislation covering issues such as cannabis research barriers, impaired driving and preventing use by youth and pregnant people. Lawmakers recently secured an amendment providing wide-ranging protections for all state, U.S. territory and tribal marijuana programs, building on existing safeguards for medical cannabis programs.

Additional appropriations language encourages sports regulators to push international officials to “change how cannabis is treated” when it comes to suspending athletes from competition over positive tests. Another report also more broadly addresses drug testing requirement for federal workers, as previous versions have done in the past.

Meanwhile, in an education spending bill, there’s again a section that would prevent the Department of Education from penalizing universities simply because the institutions are conducting research into marijuana. A different set of spending bills and reports that were recently released call for protections for immigrants who use cannabis, freeing up marijuana-related advertising and providing the industry with access to the banking system.

Additionally, there are also appropriations provisions covering kratom’s medical potential, as well as several sections encouraging the use of hemp as an environmentally sustainable and cost-effective alternative to plastics that were spearheaded by Rep. Dave Joyce (R-OH).

Importantly, it remains to be seen whether the Senate will accept any of the House-led cannabis and drug policy proposals. Senate appropriators have not yet released their spending bills for FY23, and typically wait until after the House has acted, so it’s not yet clear which issues will ultimately get reconciled by the two chambers and adopted into law.

Read the letter from lawmakers on including psilocybin language in the CJS report below: 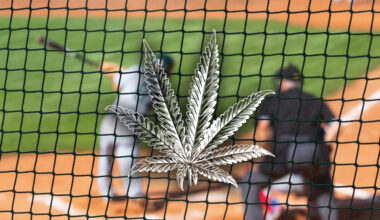