New York legislative leaders have filed budget proposals that include language to let marijuana businesses take state tax deductions that are available to other industries despite an ongoing federal ban.

Both the Assembly and Senate budget measures that are expected to pass in advance of an April 1 deadline seek to carve out an exemption that would enable cannabis businesses to make the deductions as the state prepares to launch its adult-use market. Retailers could start opening as early as this year.

This is not an issue that’s unique to New York’s marijuana industry. Medical and adult-use cannabis companies across the U.S. are precluded from making certain federal tax deductions under an Internal Revenue Code section known as 280E.

Under 280E, businesses whose activities consist of “trafficking in controlled substances (within the meaning of schedule I and II of the Controlled Substances Act)” cannot make deduct most business expenses from their federal taxes or receive tax credits, even though they are still obligated to pay taxes like any other company.

Because many states simply mirror federal tax policy in their own codes, the federal government’s anti-cannabis stance also blocks state-level deductions in some places.

As a result, some cannabis businesses pay effective tax rates of up to 80 percent, according to industry groups and accounting firms.

To help resolve the issue, New York legislators in both chambers inserted language into their respective budget proposals stating that, beginning this taxable year through January 1, 2025, “the provisions of Section 280E of the Internal Revenue Code, relating to expenditures in connection with the illegal sale of drugs, shall not apply for the purposes of this chapter to the carrying on of any trade or business that is commercial cannabis activity by a licensee.”

“I filed it at the request of the industry,” Lupardo told Cannabis Wire, which first reported on the marijuana-related budget language. “I’ve got no push back, whatsoever.”

She added that other states have been exploring similar policies for their marijuana markets. Missouri lawmakers, for example, sent a bill to the governor that would have let medical cannabis businesses make tax deductions, but it was vetoed for reasons that weren’t specifically related to marijuana issues.

“The goal here is to decouple the state from the federal government on the deduction of business expenses to allow cannabis companies to deduct on their state taxes (since they can’t do so on their federal taxes),” Krueger, who chairs the Senate Finance Committee, told Cannabis Wire. “All other businesses can deduct business expenses, and not being able to is a burden on the cannabis industry. We can’t fix the federal issue, but we can fix the state issue, which was the impetus for this language.”

In a report published last year, congressional researchers examined tax policies and restrictions for the marijuana industry—and how those could change if any number of federal reform bills are enacted.

Meanwhile in New York, regulators advanced a rule last week to make it so people with prior marijuana convictions, or whose family members have been harmed by criminalization, will get the first round of adult-use marijuana retailer licenses—ahead of existing medical cannabis businesses.

The development is one part of what Gov. Kathy Hochul’s (D) administration is calling the “Seeding Opportunity Initiative,” which she also announced last week.

Office of Cannabis Management (OCM) Executive Director Chris Alexander said that he expects upwards of 200 “justice involved” applicants to receive the priority licenses under the proposal, with retailers potentially coming online by the year’s end.

The state has also taken separate steps to get the industry in a position to have products available by creating provisional marijuana cultivator and processor licenses for existing hemp businesses that take certain steps to promote equity in the emerging industry. Hochul signed that legislation late last month. This “Farmers First Program” is another one of the three branches of the administration’s Seeding Opportunity Initiative. 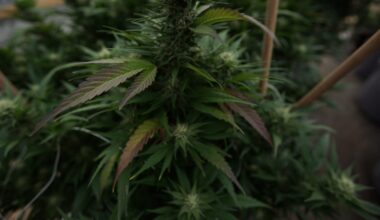