Washington, D.C. lawmakers are demanding that congressional leaders finally remove a provision from an annual spending bill this year that has blocked the District from implementing a commercial, adult-use marijuana market.

In letters to the chairs and ranking members of the House and Senate Appropriations Committees, with President Joe Biden CCed, D.C. Council Chairman Phil Mendelson (D), Councilmember Kenyan McDuffie and seven of their colleagues wrote that Congress must exclude the rider from the Fiscal Year 2023 appropriations legislation so that the District can fulfill the will of voters who approved a legalization initiative in 2014.

Despite that vote to legalize low-level possession and home cultivation, D.C. has been consistently barred from using its local tax dollars to create a regulated cannabis market under a rider that’s been annually renewed since being sponsored by prohibitionist Rep. Andy Harris (R-MD).

The provision has “effectively undercut the will of the voting residents in our city who have strongly supported legalizing recreational cannabis for many years,” the identical House and Senate letters say. “We are calling on you to take a strong stand against this intrusion into our local government and remove this misguided rider during the budget process this year.”

Mendelson, in a tweet, noted that the current situation has led to a robust network of unregulated cannabis shops that supply the product to adults who want to purchase it.

“The black market is cheating consumers and the rider must be lifted so we can get a hold of these illegal shops,” he said. “We need Congress to lift the rider so we can more effectively crack down on these illegal businesses.”

This story demonstrates what we’ve been saying. We need Congress to lift the rider so we can more effectively crack down on these illegal businesses. Consumers think they’re gifting but they don’t know what they’re getting. https://t.co/qLzb9J2ZeM

D.C. officials recently announced plans to conduct inspections of the unregulated marijuana businesses, though this week said the plan was being put on hold.

The lawmakers’ new letter also touches on the fiscal and public health impacts of Congress’s continuing blockade of a regulated recreational cannabis market in the nation’s capital.

“This is not simply an injustice, it is untenable. It is estimated that cannabis sales in the District exceed $600 million annually,” the lawmakers wrote. “A vast majority of these sales are unregulated because of the rider, complicating efforts to ensure consumer and public safety and jeopardizing the financial viability of legitimate medical cannabis businesses licensed to operate in the District.”

The House passed the relevant spending bill for FY 2023 in July, excluding the D.C. marijuana prohibition language. In the Senate, the legislation that’s currently on the table from the Democratic Appropriations Committee chairman also omits the rider, though partisan disagreements have prevented that chamber from acting on any of its spending bills so far this year.

Congress has until September 30, the end of the current fiscal year, to pass a final product. However, it’s expected that lawmakers will pass a short-term continuing resolution that maintains the status quo in the interim, as negotiations continue.

“We recognize that not everyone in Congress supports our right to become a State and achieve full autonomy for our diverse, voting, tax paying, and military serving residents,” the letters say. “Nevertheless, we are calling on you to at least eliminate this rider and permit us to gain control of the recreational market in the same way that 19 other States have already done.”

Biden has faced criticism from reform advocates over his last two budget proposals that have included the rider, despite the fact that he’s voiced support for D.C. statehood and for letting states set their own marijuana policies without federal interference.

“For far too long, District of Columbia residents have dealt with the negative impact of this rider and its prohibition-era repercussions,” Mendelson, McDuffie and the other lawmakers wrote. “We strongly request that during this year’s budget deliberations you make the removal of this rider a priority.”

For the past 8 years, a policy rider pushed by a MD representative on Capitol Hill has prevented DC from taxing and regulating recreational cannabis. It is well past time for Congress to prioritize removing this unjust obstacle to our right to self-government. #DCStatehood https://t.co/NdXU4TuFF1

In the meantime, the D.C. Council has enacted what is effectively a workaround to the federal blockade, passing a bill in late June that allows people to self-certify themselves as patients under the District’s existing medical cannabis program, through with they can access dispensaries—without needing to get a recommendation from a doctor.

Mayor Muriel Bowser (D) signed the bill about a week after it passed, and in the first month of the new policy coming into effect, the District saw a surge in medical cannabis registrations.

Bowser, U.S. Rep. Eleanor Holmes Norton (D-DC) and other elected officials in the city have routinely criticized Congress for singling out the District and depriving it of the ability to do what a growing number of states have done without federal interference.

Norton told Marijuana Moment in a phone interview in July that she’s “fairly optimistic” that the rider will not be included in the final spending package. She added that the D.C. self-certification policy is an “effective workaround” until then.

The patient self-certification provision of the measure represents a significant expansion of another piece of legislation enacted into law this year that allows people 65 and older to self-certify for medical cannabis without a doctor’s recommendation.

Meanwhile, the mayor signed a bill in July that bans most workplaces from firing or otherwise punishing employees for marijuana use.

The reform is designed to build upon on a previous measure lawmakers approved to protect local government employees against workplace discrimination due to their use of medical cannabis.

While not directly related to the policy change, a D.C. administrative court recently reversed the termination of a government employee and medical cannabis patient who was fired after being suspected of intoxication on the job and subsequently tested positive for marijuana in late 2020. It also ordered the Office of Unified Communications (OUC) to reimburse the worker for all back pay and benefits.

Read More
NNews
“In many ways, municipalities hold the fate of statewide social equity efforts in their hands.” By Jessica Gonzales… 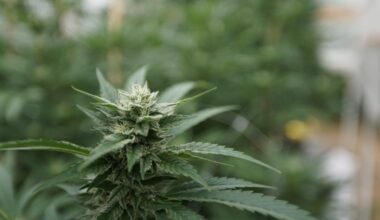